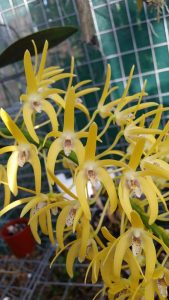 I have had an interest in orchids since the age of 14. At this time in my life, interest was somewhat fleeting, and I had about 10 plants which I grew in a tree. I had lost interest in orchids for a number of years since then and about half of these plants went to orchid heaven. It has only been in the last 5 years which I have reignited my interest in orchids…this was started by a trip to the JODOS winter show, where I bought a division of Coelogyne trinervis. I guess following this I succumbed to “orchid mania”.

I have largely specialised in Australian Native Dendrobiums and other Australian species, these would make up about 90% of my collection. Of which most of these are Dendrobium speciosum…I guess you would call me a speciosum nut…there are a few speciosum nut(cases) around the place. I grow predominately species dendrobiums from the entire eastern seaboard, with a few selective hybrids thrown in for interest. 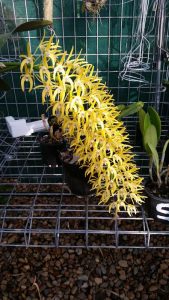 Being a speciosum nut, it is obviously a speciosum. Although it is hard to pick from the many I have in cultivation. If I were forced to choose, it would have to be Den. Speciosum var grandiflorum “Creek Aureum”. A well-known cultivar amongst speciosum growers, this plant displays elegant golden flowers on mid length racemes for the variety, with short growing pseudobulbs (only 50cm)

Considering work demands, I’m focussing on learning how to maintain the bush house more efficiently, as well as improve my cultivation abilities. At the same time, I’m embarking on a hobby breeding program in an attempt to improve on some of these magnificent plants

Learn the basics of culture. Sunlight, Airflow, Water and Nutrients (in that order). If you master these, pathogens such as bacteria and fungus will find it hard to get a foot hold.