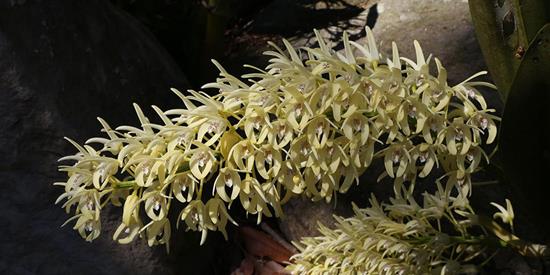 Notes and tips on the culture of this Australian Native Orchid

Culture of this orchid is same as any other orchids, it is always a balance between lighting, watering, potting
mixes etc.
There are 9 varieties of speciosum:
Var. speciosum – from the NSW – Vic border to Buladelah in NSW.
Var. Hillii – from Buladelah NSW to Mt Mee Qld – ranging westwards to around Girraween, with some
isolated colonies.
Var. Grandiflorum – further west from about Conondale Range / Mt Mee area to Mt Morgan near
Rockhampton – integrades with Var hillii at the southern limit of range.
Var. Capricornicum – located on the volcanic plugs surrounding Rockhampton and Byfield region.
Var. Blackdownense – localized on the Blackdown tableland.
Var. Carnarvonense – Carnarvon gorge.
Var. curvicaule – surrounding the Mackay region, sea level to highest areas of the great dividing range.
Var. Boreale – Townsville to Cairns at altitude.
Var. Pendunculatum– Atherton tableland west of Var Boreale on the dry west facing slopes.

Light requirements:
Speciosum love light. 50 % cloth here in Brisbane is a good benchmark. My bush house gets sun from
6.00am to 4.00pm.
Var grandiflorum, boreale, hillii, curvicuale, speciosum grow and flower optimally under this light level
Var carnarvonense, blackdownense, capricornicum, pendulculatum, flower better when they are higher to
the roof under these conditions. They often grow in more exposed locations in the wild.

Watering:
Winter watering is about once per week lightly, summer time is challenging. Excessive water can bring on
rot. This is often challenging to avoid in summer. This is why I choose a mix which is dryer where possible.

Fertilizing:
Speciosum love a good feed. I have a regular fertilizing regime which suits the smaller plants without
supplement. But for pots greater than 200mm, I throw in a small handful of slow release fertilizer every 9-
12 months to give them an extra boost.

Pseudomonas, a type of bacteria, is the number one nemesis in my opinion. It appears as rotting new
growths from the top or base. If you cut the growth off and smell it, it will smell ‘fermented’
if you have pseudomonas infection.
I have battled this for many years, and recently have been put onto a formula which supposedly gives good
results. I have observed an improvement, but by no means can it be eradicated. Talking with experts such
as Ross Harvey, ( Cedarvale Orchids ) he says it cannot be defeated in a bush house full of speciosum, but can be managed vigilantly by cutting back and destroying the dead tissue (remove it away from the bush house all together).
Monthly pool algaecide and phosphoric acid systemic fungicide (Anti-rot) sprayed onto the plants through
the overhead watering system is my current preventative measure. Do you own research before you adopt
this method. Overall speciosum are hardy orchids, more hardy than many other.

Potting and division :
It can be very daunting for some people to hack a large tightly  growing plant  to pieces. At the right time of
the year, quite ‘aggressive’ divisions can be performed with minimal setback.
Potting mixes I prefer:
Medium- about 25%charcoal, 5% perlite, 70%medium Ausgro bark.
Large- Same ratios but with large charcoal and large bark.
I tend to prefer to use mix which has been dried out. I like to sift off the fines, as these an choke the roots
down the track and lead to accelerated decomposition.
Tools I use-
Snips – for dead roots.
Secateurs- for cutting the root ball, some people us hatchets aces or cane knives.
Knife- to cut bulbs, sometimes I pull away with bare hands.
I always use Trisodium Phosphate for sterilization of tools.
I use raw powered Mancozeb or Steriprune for covering up the division wounds on the pseudobulbs to
prevent fungus attack.
I like to use port pots. If using a deeper pot, like traditional garden pots, as many growers do, crock the
bottom up about 30% with polystyrene.
I sometimes add rock to my mix to give them a bit of substance for the roots to hang onto. But this does
make the pots very heavy with large specimens. 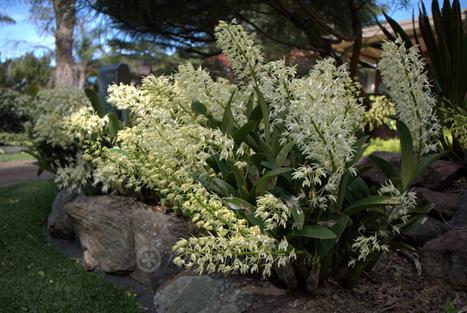